Staying with the host family while in Japan was an amazing experience. Throughout my stay they were very accommodating and genuinely cared for my wellbeing, always asking if there were any foods I would like to try, anywhere I would like to go, and also caring for me when I fell sick. We often spoke about general things and in particular, the differences between Japanese and Australian culture. My Japanese also greatly improved as they also helped with me my homework. Especially because I stayed in Osaka, I had the opportunity to also learn and become accustomed to their dialect, which is different from standard Japanese. They were kind enough to take me to many different places including Kyoto where they helped me try on a kimono for the first time, Osaka Aquarium Kaiyukan where we also saw the many Christmas illumination shows and Fushimi Inari shrine for hatsumode. They also took me to many different Japanese food places such as sushi train, nabe and yakiniku. Just staying at their home was incredibly welcoming as well. As it was winter when I stayed, they found out I had never used a kotatsu before and was excited to show me J. The homemade food was always delicious and they always made sure to cook me something new to try. They also introduced me to other things such as watching the ice skating, Japanese dramas and the news. I also found out that my host sister was a big fan of the show Glee, and so we watched and discussed a lot about that. It didn’t take them long to find out I was the biggest fan of eating desserts, and so they always bought me different types of sweet snacks and also recommended I go to Sweets Paradise, and all-you-can-eat dessert buffet, which I enjoyed immensely. For Christmas they held a small party with their friends and I was able to join in where we played purezento koukan, and for New Year’s Day, we ate osechi ryori with their family. I was always immersed in their culture and had the opportunity to experience it all. They were the nicest people and I was so glad to have met and been given the opportunity to stay with them. My only regret is that I wasn’t able to stay in Japan longer and continue to see them. My stay with them will stay memorable for a very long time. 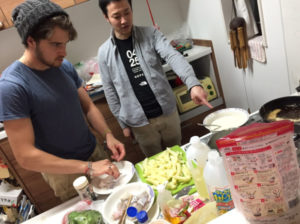 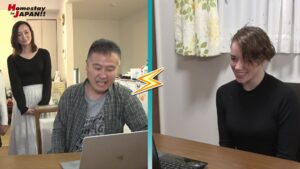